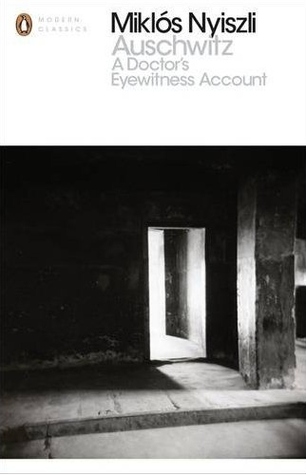 When the Nazis invaded Hungary in 1944, they sent virtually the entire Jewish population to Auschwitz. A Hungarian Jew and a medical doctor, Dr. Miklos Nyiszli was spared from death for a grimmer fate: to perform “scientific research” on his fellow inmates under the supervision of the infamous “Angel of Death”: Dr. Josef Mengele. Nyiszli was named Mengele’s personal research pathologist. Miraculously, he survived to give this terrifying and sobering account of the terror of Auschwitz. This new Penguin Modern Classics edition contains an introduction by Richard Evans.

I really enjoyed (if that is the right word) reading a story about Auschwitz from this perspective. I have heard all about Auschwitz from a British point of view and hadn’t read anything from anyone who was close to the German side of the story. Miklos is a Hungarian Jew who was forced to work closely with the German’s doing terrible things to people he related to.

I think memoirs like this are going to be few and far between. I think there may be a few things that Miklos might not be being 100% with, especially with the amount of trust he got from the Germans and that they allowed him to freely walk around camp without hesitation yet they were extremely strict and would kill people in the camps for far less that what he was getting away with.

I am really looking forward (in a way) to read more memoirs from world war 2 and possibly world war 1 and learn more in regards to these historic events. With many people who survived world war 2 now dying, I think we need to make sure that things like this are kept and people read them so that this is not lost on future generations.

Let me know if there any other memoirs which would be a good read?