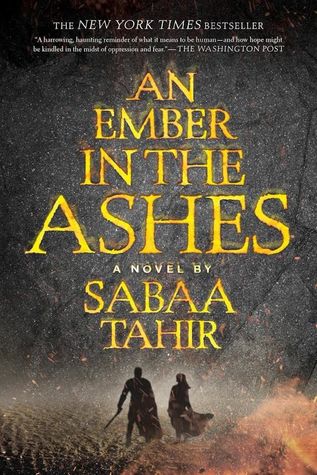 An Ember in the Ashes

Under the Martial Empire, defiance is met with death.

When Laia’s grandparents are brutally murdered and her brother arrested for treason by the empire, the only people she has left to turn are the rebels.

But in exchange for their help in saving her brother, they demand that Laia spy on the ruthless Commandant of Blackcliff, the Empire’s greatest military academy. Should she fail it’s more than her brother’s freedom at risk…Laia’s very life is at stake.

There, she meets Elias, the academy’s finest soldier. But Elias wants only to be free of the tyranny he’s being trained to enforce. He and Laia will soon realize that their destinies are intertwined – and that their choices will change the fate of the Empire itself.

Ok, I never this book. I did really like it BUT there were some things which I thought could of been done a little better.

Romance? Oh sweet Jesus the romance in this book just didn’t go down with me at all. the relationship between Laia and Elias is something I just couldn’t buy into at all and I was really hoping for something to blossom between Elias and Helena. The relationship and romance between these two characters, was just SO much more believable. I personally felt like the author couldn’t make up her mind which character should be with who. Laia and Keenan also had a blossoming relationship which didn’t take off. None of the romance or relationships made sense to me.

I did really like the writing by this author. Everything did flow really well and I personally felt like everything she was descripting was done really well. Apart from the silly romances I did connect with the characters and I did feel sorry for Laia because of everything she had been through. I care about all the characters enough to continue on with this series. I  would recommend this book to people but I would explain the romance and how I felt about it before they went into it.

Hope you like my review. Let me know what you thought of this book if you have read it.