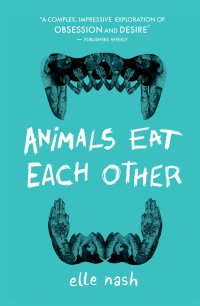 I RECEIVED THIS BOOK FROM 404INK.
ALL MY THOUGHTS ARE MY OWN AND 100% HONEST

In Elle Nash’s stunning and powerful debut, a girl with no name embarks on a fraught three-way relationship with Matt, a satanist and a tattoo artist, and his girlfriend Frances, a new mom. The liaison is caged by strict rules and rigid emotional distance. Nonetheless, it’s all too easy to surrender to an attraction so powerful she finds herself erased, abandoning even her own name in favor of a new one: Lilith.

As Lilith grows closer to Matt, she begins to recognize the dark undertow of obsession and jealousy that her presence has created between Matt and Frances, and finds herself balancing on a knife’s edge between pain and pleasure, the promise of the future and the crushing isolation of the present. With stripped-down prose and unflinching clarity, Nash examines madness in the wreckage of love, and the loss of self that accompanies it.

Nash’s work has been featured in Cosmopolitan, Elle, Marie Claire, and others.

*INITIAL THOUGHTS IN MY NOTEBOOK*

The main character doesn’t have a name, you never learn her true identity but she is on the prowl for self-approval. She will sleep with anyone who gives her any type of attention.

The main character is introduced to two other characters, Matt and Frankie. They are a manipulative, and controlling couple who take the main character under their wings and nickname her Lillith. They control “Lillith” with sex. It is an extremely abusive and horrible relationship, but she accepts it as someone is giving her attention. She is a young girl of 18/19 she doesn’t know what she wants. Her best friend Jenny is also on the look at for acceptance, but she is the one that “Lillith” will reach out to no matter what.

The book is interesting because each character could be the main character depending on how you want to view them all.

Every character is selfish and only thinks of their own interests, thoughts, and feelings. They don’t think of the consequences of any actions.

I really liked this debut and I will be checking out more from this author.

This isn’t something I would usually pick up but I am so glad I did.